No-one knows for certain when the first carpet was woven. Today the most ancient handmade carpet is dated back to the 5th century BC. For a long time carpets had remained items of luxury. Their high value was conditioned by the laborious handwork and by the use of natural pigments. Italian merchants were the first who acquainted Europe with oriental carpets. And Venice was the largest centre trading in this sort of goods. 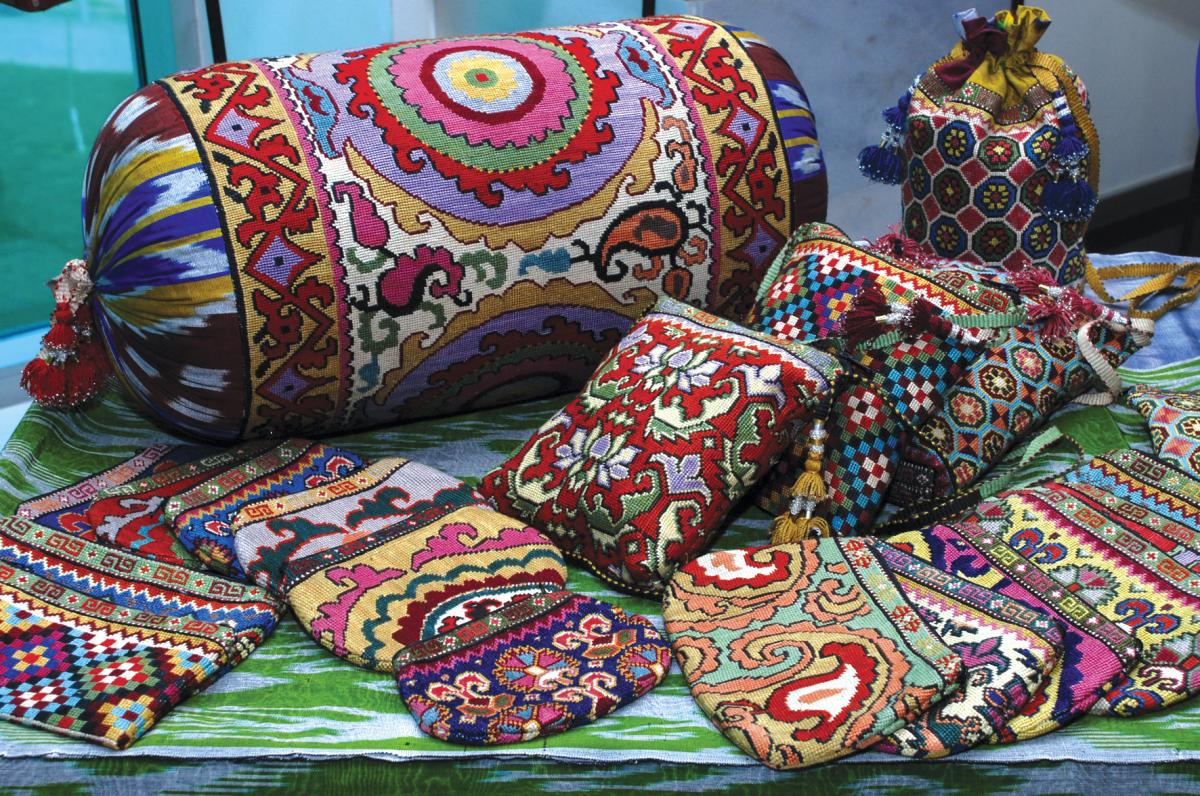 At that time Kashkadarya was one of the best known regions producing traditional carpets. Here the carpet production was mainly concentrated in the hands of the Arabs, who had settled in the Central Asian area in the late 14th century, and had spread to Kashkadarya in the early 18th century. At that time their carpets were already marked by high quality and were very popular at the markets, just like the homemade carpets of the Turkmen and nomadic Uzbek tribes. Camel and sheep wool was (and still is) the material used in carpet making.

In course of time the local carpet making was enriched by elements from the arts of different peoples inhabiting this area. This led to the appearance of carpets combining elements of Uzbek, Turkmen and Arabic carpet making traditions. However, mutual influence in no way prevented the peoples of the region from preserving their own traditions. Skilled needlewomen can easily weave into a carpet an image from the traditional Uzbek satin fabric khan-atlas or traditional patterns from the Turkmen or Arabic fabrics.

The present-day carpet making is not going down, but on the contrary, is progressing stably which is largely conditioned by the development of tourism. Among the items produced in Kashkadarya are pileless carpets, named by local people ‘arabi gilam’ (Arabic carpet), prayer rugs (joynamaz) and curtains, as well as various things of other types.

The village of Jeynau can be regarded as the largest carpet producing centre, with a lot of Arabs who had moved here in the medieval time and still living in the place. They have assimilated in the recent centuries but have retained their ancient cultural traditions, and the older generation even knows the Arabic language.

Carpet weaving is not the only craft Kashkadarya is famous for. Shakhrisabz, the second largest town of Kashkadarya province after Karshi, is well-known for its highly skilled masters. The fine artistic copper and clay items made by the contemporary craftsmen from Shakhrisabz win prizes at various exhibitions. Skullcaps of local manufacture decorated with golden threads have won golden medals at international exhibitions in Canada, Turkey and Japan. And if you wish to see truly interesting embroidery, be sure to visit Shakhrisabz.

Artistic embroidery reached its peak at the Timurid time. The Spanish ambassador Rui Gonzales de Clavijo, who was a guest at Tamerlane’s court, told that ‘in the garden there were marquees and palanquins made of many-coloured carpets and silks, and silk mattresses with the embroidery of flowers, oak-trees and other patterns lay both inside the marquees and outside them, around the khon-takhta (low table)’. Since the Timurid period artistic embroidery has been used in the decoration of ceremonial clothing, such as robes, national trousers, turban skullcaps, belts and shoes.

Masters from Shakhrisabz were renowned for their robes, shoes, headdresses and harnesses, which they made for noblemen. Unique examples of early-20th-century embroidery can be found today in many houses of ordinary people in Shakhrisabz. The iroki style was the most popular type of embroidery.

‘Heirs to the Silk Road’, a book by Johannes Kalter and Margareta Pavaloi (Stuttgart, 1995), contains photographs of 19th-century items made in the iroki style, such as skullcaps, belts, bridles and horse cloths.

Clothes were embroidered in accordance with the person’s age, social status, views and way of life, as well as with the society’s economic activity and the climatic conditions of the area. The windows, walls and doors of houses and yurts were also decorated with special embroidered fabrics.