THE CONDITIONS OF THE CONTRACT OF CARRIAGE

3. To the extent that it is not contrary set forth in claim 2, transportation and other related services provided by the Carrier are governed by the provisions of the Contract, conditions, rules and requirements of the Carrier, as well as the rules of the applicable fares.

4. If the carriage is performed by more than one Carrier, each of them has the right to apply different terms and conditions of the contract of carriage and fare rules.

5. If a Carrier sells tickets for transportation on the routes of the other Carrier, it acts only as an agent of such Carrier.

6. The denomination of the Carrier on the ticket may be abbreviated. The full name and its abbreviation are contained in carrier's rates, conditions of carriage, regulations or timetables of the Carrier concerned. Address of the carrier shall be the departure airport, as opposed to the first abbreviated name of the carrier on the ticket. The agreed stopping places shall be the places indicated in the ticket issued to the passenger, or shown in the carrier's timetable as scheduled stopping places on the route. Transportation, executed under this contract by several carriers, is considered to be a single carriage.

8. Checked baggage will only be issued to the bearer of the baggage receipt.

9. The validity of the ticket is one year from the date of its issue, unless otherwise specified in the fare rules applied for the payment of carriage, or related regulations of the Carrier. The rate of carriage to be performed under the contract may be changed prior to the transportation. The carrier may refuse the transportation, if the fare for carriage have not been paid.

10. Ticket is only valid for the specified flight and date, and only to the person in whose name the ticket was issued.

11. Refund for fully or partially unused transportation is performed at the point of purchase of the ticket within one year from the date of ticket issuance if the carriage has not been performed on any of the sections of the route, or within a year of the date of departure on the first point of carriage, unless otherwise provided by the fare application rules and other rules of the Carrier.

12. The Carrier undertakes to use its best efforts to carry the passenger and baggage within reasonable time, acceptable by the passenger. In order to avoid cancellation or delay of the  flight, the Carrier may offer the Passenger a flight on another aircraft with another Carrier and/or any other method of transportation without any additional surcharges. The time specified in the schedule and other documents is not part of this agreement. The schedule may be changed by the Carrier without notice.

13. The passenger must comply with all the requirements of the state authorities of the countries of departure, transit and destination on it's travel, to have an entry, exit and other necessary documents (passport or other legal identification card) and must arrive at the airport in time designated by the Carrier and sufficient to meet all state pre-flight formalities.

14. The carrier has the authority to transfer the passenger's personal data and all information concerning his personal reservation on the relevant flights to the national and foreign state authorities in cases, when these authorities will request the carrier of this in accordance with the statutory rules and regulations.

15. The carrier is entitled to refuse the Passenger in transportation, both initial and subsequent:

16. In case of denial of entry into the country of destination, the Carrier may charge the passenger for all costs incurred by the Carrier at the point of refusal of entry, during the expulsion and return transportation to that passenger. The passenger is inadmissible responsible for any such costs unless it is proved that the denial of entry and the return journey was the result of intentional negligent acts or omissions of employees or agents of the Carrier committed in the performance of official duties deliberately or through negligence and with knowledge of the implications of such actions. In these cases, the responsibility for reimbursement should be imposed on the perpetrators of such intentional or negligent acts, unless such persons can prove that they have taken all measures in order to avoid the damage or that such measures were impossible to undertake.

17. No agent, servant or representative of carrier has authority to change or waive any provision of this agreement.

IMPORTANT NOTICES TO THE PASSENGERS

NOTIFICATION ABOUT GOVERNMENT TAXES AND FEES

The ticket price may include taxes, fees and charges apply by the state administrative organs and airports in relation to Carriers. These taxes and fees, which may be a significant part of the cost of the ticket can be specified separately in a designated field in the ticket (under the TAX), or be included in the ticket price. You may also be asked to pay taxes or duties which have not been paid when purchasing the ticket.

Passengers whose carriage involves a destination or a stopover in the territory of the country that differs from the country of departure are notified that in regards of their transportation, including any period of it, are applied the provisions of the international Treaty of the Republic of Uzbekistan, known as The Warsaw Convention for the unification of certain rules for international carriage by air 12.10.1929 with changes and additions, signed at the Hague 28.09.1955, which regulates and limits the liability of the airline.

For Your trip on the flights of Uzbekistan Airways are applicable the following limits of liability established by the Warsaw Convention, the additional Hague Protocol and the Air code of the Republic of Uzbekistan:

3. Regardless of these limits of liability, the passenger can increase the limit of liability of the Carrier for loss, damage or delay of baggage, declaring the value of his baggage during the check-in and paying an additional fee.

4. The Carrier is also liable for the payment of compensation and provision of compensatory services to the passengers who, in the presence of a confirmed booking and issued tickets were denied of seats because of the sale of seats on the flight in excess of the availability of seats in the cabin, and also in cases of flight delay associated with the Carrier.

The Carrier may deny the claim by the passenger or his legal representative in cases where :

If Your journey involves multiple Carriers, obtain information on the limits of liability of each of them, as to the other participating Carriers may be applied some additional limits of liability established by the Warsaw Convention 1929 and the Montreal Conventions for the unification of certain rules relating to the international carriage by air, depending on which of these documents can be applied.     Detailed information about the conditions of occurrence of liability applicable for Your trip can be obtained from each Carrier, their authorized agents and the representatives on their official websites.

NOTICE OF DEADLINE FOR THE SUBMISSION OF CLAIMS AND LAWSUITS

For domestic flights a written claim to the Carrier may be filed within six months. This period is calculated:

In case of international transport the written claim to the Carrier may be brought:

In the absence of a written complaint, stated in a specified time, the claim against the Carrier can not be made.

FARE RULES Consult the Carrier or its agent on the fare conditions when buying a ticket or making changes to the conditions of transport (flight, class of service, departure date, etc.). Failure to comply with this recommendation may lead to an increase in fare and/or additional costs, because the rules for application of some special fares provide for the application of fees for the cancellation of the flight or for the change of the booking in the tickets.

TRAVEL DOCUMENTS You cannot travel if you do not have the necessary valid documents such as passport or other legal identification documents, visas etc.) required by the legislation of the respective countries.

LUGGAGE Checked baggage. Luggage is registered for a single carriage to destinations identified in the route of the ticket presented for registration.

The Carrier permits a free checked baggage within the established norms, which can vary depending on the class of service and/or transportation route.

Carriers involved in the implementation of passenger transport, may impose additional fees for checked baggage in case of exceeding the permissible norms of transportation in their areas.

The Carrier is entitled to limit or refuse to accept baggage in excess of free baggage allowance. If a passenger has presented for the transportation the baggage in quantity greater than the specified allowance, such baggage is accepted for carriage only subject to availability of containers and subject to the payment of additional fees.

In regards of some items carried as checked baggage an increased value may be applied provided that the passenger has paid the additional fees.

The Carrier is not liable for fragile, valuable or perishable items carried in the checked baggage. The passenger shall carry his money, valuables and documents on him, not surrendering to the baggage.

Hand Luggage. Passenger may carry his hand luggage (bag etc.) in the cabin of the aircraft under his own responsibility. The total weight of this luggage should not exceed 8 kg for passengers of economy class and 10 kg for passengers of business class. The maximum size of the hand luggage on the sum of three dimensions not more than 115 cm in sum of three dimensions . It is recommended to carry a minimum amount of hand baggage.

If the carriage is performed by more than one Carrier, each carrier may have different requirements in respect of baggage (regarding the registered baggage and the hand Luggage).

DANGEROUS OBJECTS AND SUBSTANCES IN THE BAGGAGE For security purposes, dangerous goods must not be packed in the checked or unchecked baggage, unless otherwise allowed by the special permission.

Detailed information about the dangerous objects prohibited for transportation by air transport is provided by the Carrier on its website and in a special informational materials. Sample list of dangerous objects (including but not limited to) is as follows: compressed gases, corrosives, explosives, flammable liquids and solids, radioactive materials, oxidizing materials, poisons, infectious substances, and briefcases, and briefcases with installed devices for giving alarms. For security purposes other restrictions may be established. 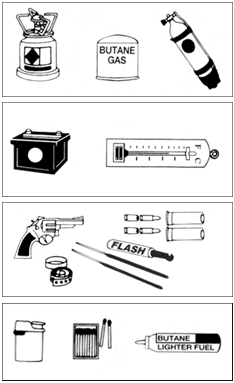 In order to ensure the safety of the passengers a passenger should not carry on itself and in the baggage the following dangerous items and substances: