Due to onboard service update, aimed to prevent the spread of coronavirus infection (COVID-2019), we have temporarily suspended some facilities, including the loading of IPADs for business class passengers and printed media (newspapers and magazines) on board. For passengers service we use only disposable products. We realize that accepted measures affect on the service quality, but the passengers and staff’s health is our priority. We do apologize for this inconvenience and thank you for your understanding.

Air travel was a luxury once. Today’s aviation is a usual mode of transport – fast and safe. An airplane is not a restaurant or a cinema, of course, but a flight is like a forced break from your everyday duties and leisure activities. Sometimes it lasts two or so hours, sometimes eight hours or even longer. 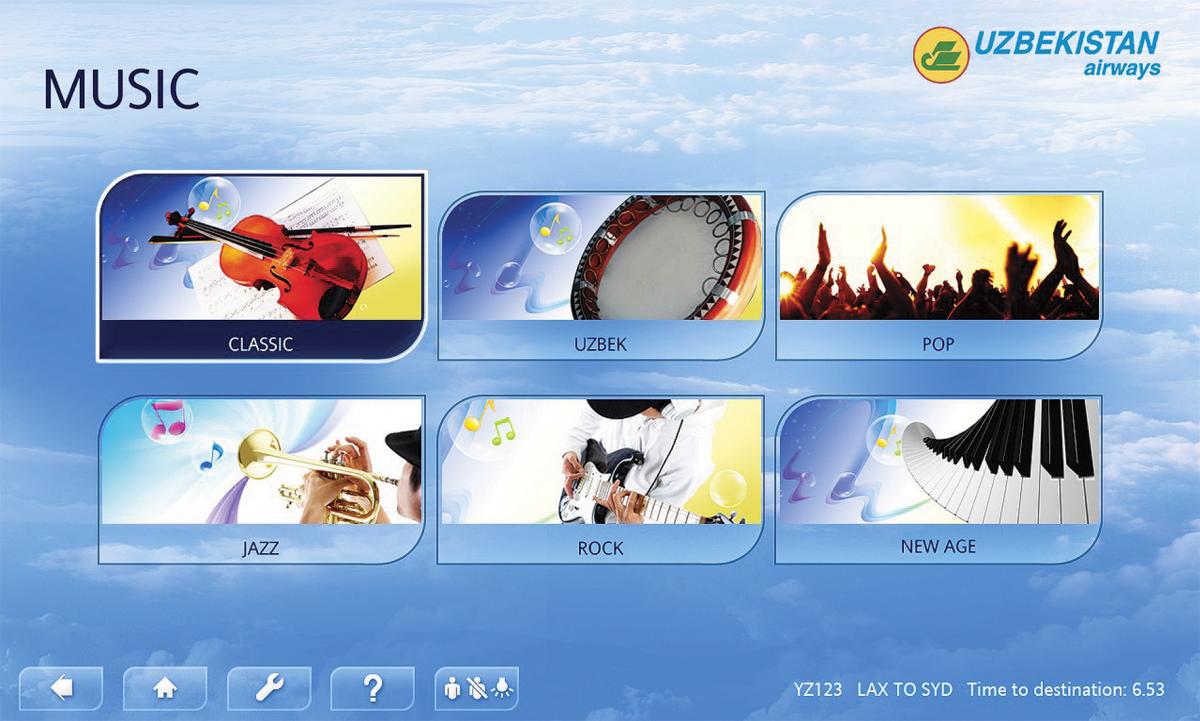 If you fly business class, you can charge and use your own device – an iPod, a phone, a laptop, etc. Just plug yours into the 110VAC power supply unit in your seat. Every seat is equipped with all necessary facilities for work, rest and entertainment. The new Boeing-767-300ER aircraft of Uzbekistan Airways feature the up-to-date entertainment system eX2. 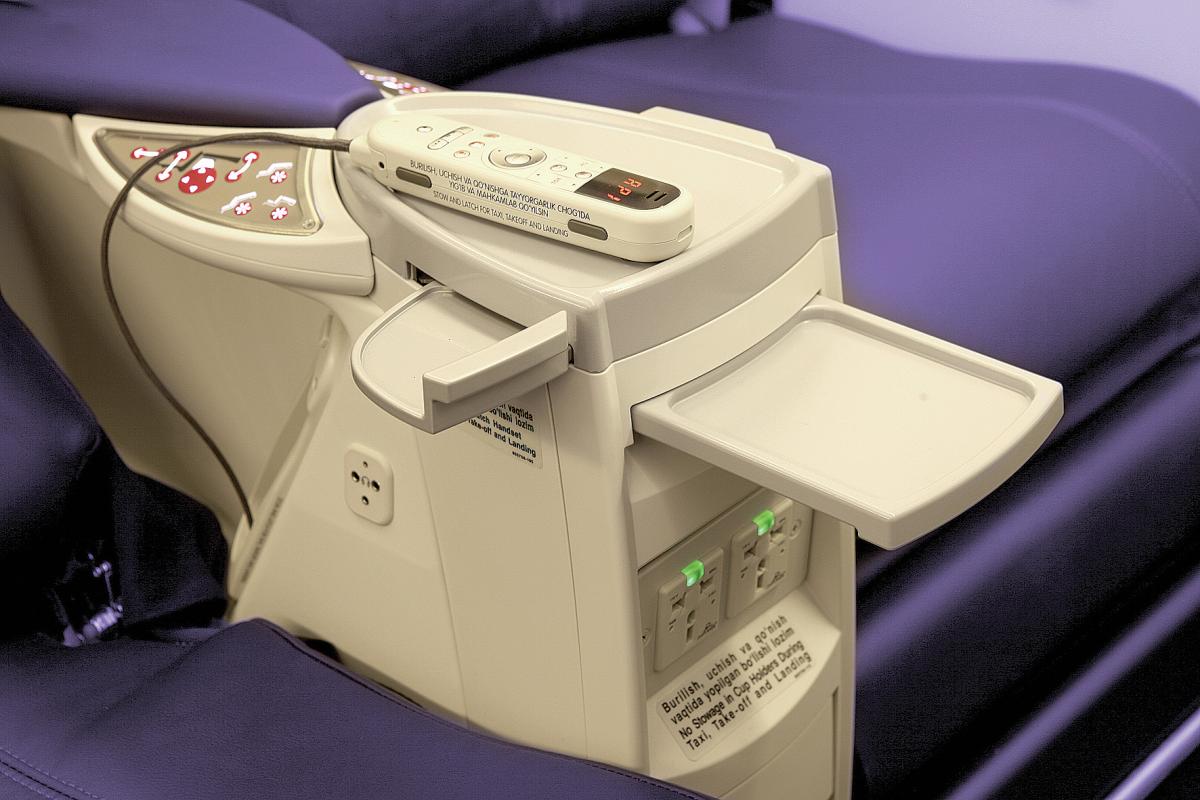 A remote and an individual 15-inch digital screen will allow you to play, stop and rewind your entertainment programmes. Whatever you decide to fill your time with – listening to music, watching films or photos from your flash drive, or playing video games – there are a lot of multimedia system channels at your disposal.

You can play a game with a computer or a passenger in any cabin aboard.  Just choose a game and invite someone to join it.

The online flight information system VOYAGER will provide you with the current flight speed, outside temperature, time left until you reach the destination, exact arrival time and other flight data. You can also see your route map progress online. 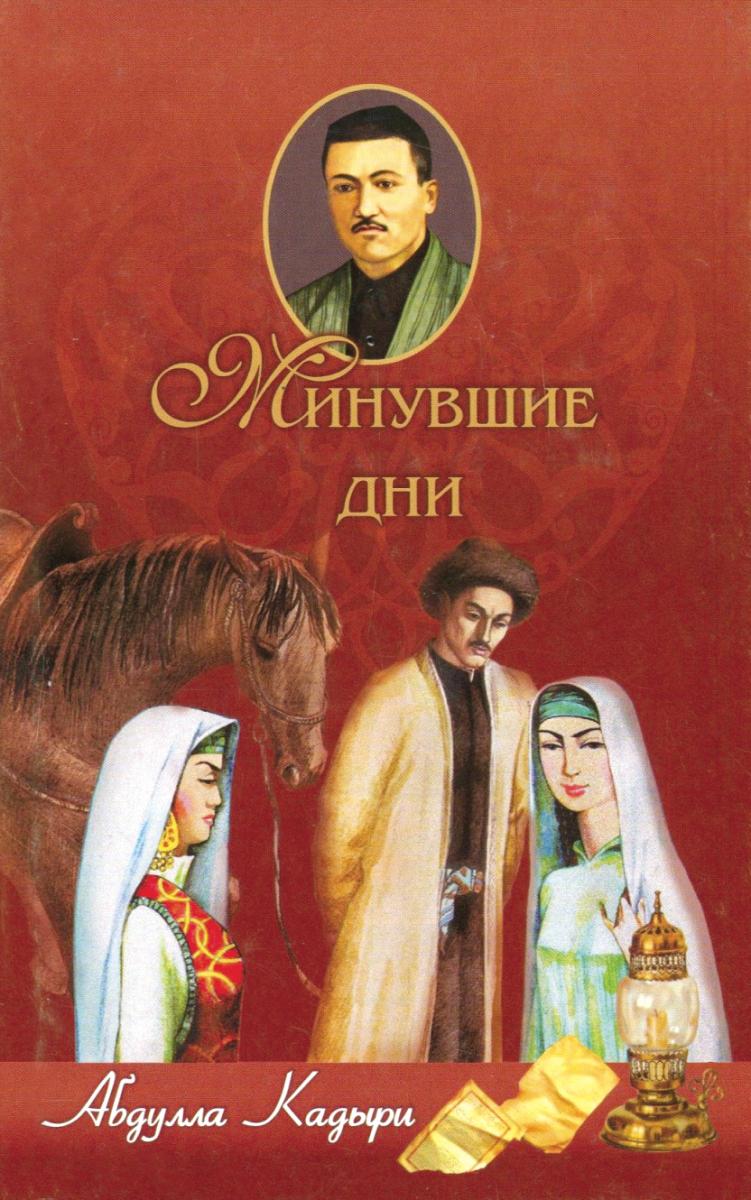 The film is based on the novel Days Gone By by Abdulla Kodiriy, an Uzbek and Soviet poet,  writer and translator. The setting is Tashkent at the beginning of the 19th century. The film shows the atmosphere of fierce conflicts between feudal lords and their greed for power, suppression of human freedom, and dominance of family traditions. Their victims are Kumush and Atabek who are in love with each other.

The film is a lyric story about young people, their search for the truth and first hard experiences of love. There are three main characters in the film. Rodion – a kind person of moral integrity – is deeply distressed by the breakup of the relationship with the girl who does not love him. He himself starts the breakup to let her be free from having to lie and suffer from discomfort.

Rustam’s life is different. He is talented and loved. The third man, of Greek origin, returns to his ancestral land where he has found his mother and sister.

The protagonist is an elderly woman named Anzirat. She lives with her son’s family in an Uzbek village. Her neighbours do not really like her, for she is very strict and authoritarian. Feeling she is going to die soon, Anzirat tries to put everything in order for her family. Her son, however, is busy building a family football team. He wants his wife to give birth to a boy.

The film is based on the novel The Mischievous Boy by Gafur Gulom, an Uzbek and Soviet poet, writer and translator. The film is considered to be one of the best Uzbek films. It is about a boy’s adventures, during which he meets various people and deals with various life situations. 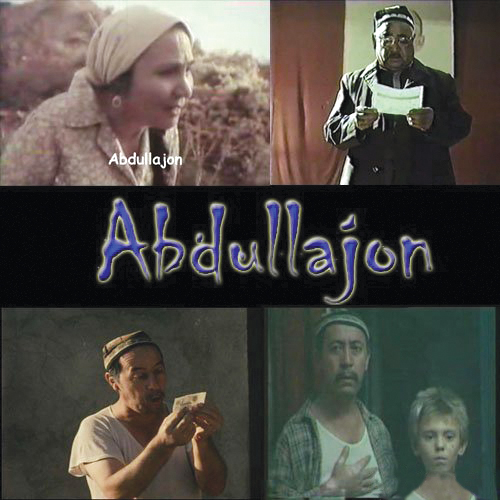 The alien spacecraft crashed in the collective farm “Communism” (Uzbekistan). Farmer Bazarbay Narmatov, finds an injured alien boy who survived after the crash. The farmer takes boy home and names him Abdullahjon. Bazarbay told nothing to his neighborhood about the origin of the boy. So, the alien guest was accepted to be  Bazarbay`s illegitimate son. Abdullahjon, or Dedicated to Steven Spielberg – fantastic comedy about an alien in Uzbek neighborhood.

He is poor and she is rich. He is a simple street vendor and uses public transport. She is a student of a university and drives her own car. Seems to be an old love story but everyone has a chance to have a new personal view.